New creations and updates for Sudden Death and Battle Tank

Its been a month since I've posted which is a terribly bad habit that I intend to break immediately. At the very least I will be posting on Sundays from now on since its the day I have the least to do.

So first some news. 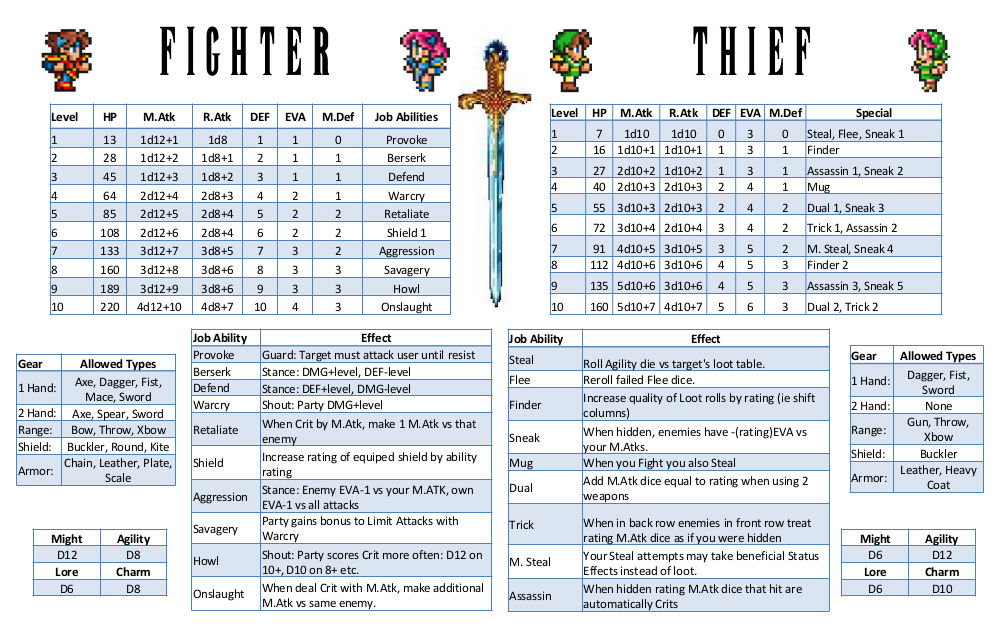 Due to a mad fascination with 8-Bit Dungeon by +Levi Kornelsen  I have decided to make my own adventure game aimed unabashedly at emulating Final Fantasy at the tabletop. And because this is a sequel I have update the graphics to 16-bit.

It's called 16-Bit Adventures. You can see a the Job write-up for Fighter and Thief to the right. That page contains every thing you need to know to play those Jobs from levels 1-10.

Playtesting is going well if slowly due to my and +Christopher Andersen's time constraints and technical difficulties (frex, at our last gaming night the only toilet in the house broke and it became plumbing night). After this round of feedback is in we will be making a dedicated effort to get a kickstarter going so that we can publish the game with finalized art by +Laura Hamilton.

On the right is Laura's sketch which the current Sudden Death playtest version uses for its artwork. On the left is the final version she did which will be used for the production version.

The PnP doc will also be updated with the finalized art if the campaign is successful, albeit at a reduced resolution.

The realities of being a tiny, part-time  gaming outfit have harshly taught us here at Inspired Press that we just can;t afford to produce Battle Tank for the price point we want and we aren't yet prepared to handle going for a higher price. Making the game cost more will require a massive upgrade to the board art and token sculpts that we are not in a position of pursue.

But that doesn't mean we intend to abandon the project, we're just going to tone it down. Since my main goal is to make it so other people can play it we've decided to create a PnP version using our existing art and some modified drawings for foldable stand-ups for the tokens. The board is already done so its just the tokens that need to be put into usable form. Once complete it will be free to download on our webstie at Inspiredpress.net.