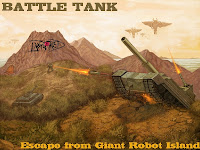 -Battle Tank on Giant Robot Island is a strategy board game designed for 3-5 players.  One player chooses to play as Dr. Victor von Mechanstein, a twisted evil genius with a penchant for giant mechanical death machines who will use his robots to prevent the escape of Sgt. Stammel and his men. The other players each man a battle tank as members of the sergeant’s platoon, and attempt to escape to the beaches of Giant Robot Island, blazing a trail of robotic wreckage along the way.

-A quick two player card game pits two players against each other as ninjas with the intent to kill... a game of strategy, wits and stealthy attacks. A small 27 card deck is all that's required to play, and each game lasts only a few silent but deadly minutes. Ask us about playtesting if you see us out at conventions or game stores, or download our Print & Play demo and try it out yourself.

Flash of the Blade

-A card game of razor wit, cold steel and true grit. Players take the role of duelists fighting for love, money or vengeance in an age when honor was made of steel. For 2 players. 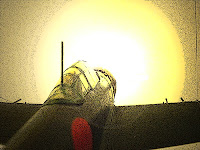 -Take to the skies over the Pacific in 1942 in this fast paced card game of aerial combat in the rugged Grumman Wildcat or the nimble Mitsubishi Zero in an all out fight to the death for air superiority. For 2 players.

-Another Inspired card game. Meant for 3-6 players, each takes the role of a young dragon trying to claim the surrounding countryside for its domain.  Players vie for control of territory, wealth, livestock, and the most tasty and valuable of all treasures... maidens.  The quest for a most impressive hoard isn't without its risks though, as the young dragons must watch out not only for each other, but for would-be heroes seeking to put an end to their countryside ravages. -A Tabletop JRPG heavily and unabashedly influenced by Final Fantasy.  The rules are in the initial stages of development and are open for playtest and feedback.


-An RPG of lighting fast martial arts usable in several popular genres from wuxia to chanbara, to swashbuckling or Hong Kong action. In Celestial Warriors the action is reinforced by a back and forth approach to combat where each character has a dice pool that depletes as they take actions.

A very simple game meant for martial arts action following the paths of the Bagua. To complete actions one must begin with one trigram and end with a second to form a hexagram. The dice merely determine how in tune with this action the performer is at that moment and whomever is most balanced is the victor.