Something Different: a Review of Kaiju Incorporated. 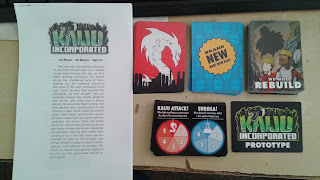 I've never done a review of another game on the Inspired blog but I figure this is as good a game to start with as any.

My impression of the premise is that you play a ruthless multi-national corporation who is trying to profit from rebuilding in the wake of a massive kaiju event.

So we're off to a good start.

This is prototype card game from +Evil Hat Productions for 2-5 players. It's a little over 100 cards in 3 main types: properties, kaiju, and stuff. There are also faction cards but they are identical mechanically, so I'm not counting them. Their only difference is the city they favor.

The property cards have a few important stats. Most obvious is that they are color coded (red, yellow, blue) followed by them being either your-turn or rival-turn. Each also has a city associated with it which is a big pile of potential VPs come endgame. Lastly, but vitally, is the income generated by owning the property.

For 3-5 players you start out by picking a faction randomly. Each one has 3 'your turn' properties with identical city and income ratings but different colors (suits). The city on these starter cards is the capital city of your faction's home country. These cities are not repeated on the cards you can draft.

Once you get your starters all set out you need to set your research and kaiju attack tracks to 0 and your bank to 5. The kaiju and research trackers are wheels and they will loop around repeatedly throughout the game. When they do, you either get swatted by the current monster or get to pick a new stuff card depending on which track maxed out. The kaiju mainly do bad things to you like destroy your properties, but there are a couple who only punish you if you are winning. The stuff (new products technically) are the other source of VPs beyond just collecting cities.

So with that done, you flip over the top 3 stuff cards so people get some choices when they pick which one they acquire, and these replenish immediately when taken. Then you flip the top card of the kaiju deck to see the active monster. The baddie stays around until its trigger condition is met, then you discard it and flip the next one.

When the stuff deck is depleted it's game over (there are some handy Kaiju-skin Handbags that go at the bottom, once they go out that's the last turn).

When the kaiju deck is run through, you shuffle and keep going. The monsters don't go away just because they've all had a turn to mangle your bottom line!

A turn starts by flipping over cards from the properties deck. You flip 1 plus one more for each player, and then each player takes turns choosing which property they want from those revealed. In order to avoid the same person always going first, the player who chooses first each turn shifts around the table.

Once you have your property chosen, you decide to either buy it or generate income from it. If you buy it then you put it in front of you in a column with other similar cards (same suit and type). If you have all 3 suits and rival/your types you will end up with a maximum of 6 columns. Table space might become a premium.

If you don't want to buy the card, you can instead discard it to gain income. In this case the specific card is only relevant for its suit, all other stats are ignored. You then gain cash and advance your research and kaiju tracks by adding up all the numbers for those on the 'your turn' cards of the discarded card's suit. Once you do so your opponents also gain income based on the discarded card's suit but naturally they only count their 'rival's turn' assets.

Play continues in this way until the Kaiju-skin handbags appear and then you count VPs. This takes roughly 10 minutes per player.

The art is amusing and the puns and references to major kaiju franchises of the past had me giggling every time a new one showed up. I was reminded of Machi Koro while playing due to the your-turn/rival-turn mechanics and the need to draft multiple suits of properties.

I also like how there were special rules to make the game work better for 2 players. Without that it would very quickly get tedious with only one person to play rival-turn cards against.

There's a depth of strategy as well that gets more complex as you add more players. Everyone wants to get at least one property from each city to get maximum VPs and they all want to have the most of their own city for the bonus. This means sometimes you want to grab another player's city so that you can deny it to them.

Where it gets more individual is in how you go about tailoring your suits and types. In games I've played there is no obviously optimal strategy, but rather it is influenced by what other players are doing. Sometimes one person focuses on a single your-turn color, which means it is now valuable to stock up on rival cards of that color. Other times people focus on diversity so that they can always advance regardless of what cards are available, and I'm personally a fan of loading up on rival cards so that other people's efforts benefit me all the time.

That last one seemed optimal at first but since most cards advance the kaiju tracker it means that (to borrow a phrase from Fiore) you have shown them how to hurt you. Once you eat two or three kaiju attacks in a turn you will know what I mean.

In all, if the final game is like the prototype I'll be getting it.