Sudden Death might be my favorite thing we've come up with at Inspired. It combines my interest in simple gameplay with ninjas, in a package that takes less than five minutes to play.

That's not to say I don't like complicated games, but I prefer ones where the complexity comes from the strategy, not from complicated rules. Go is a classic example of the type of complexity I prefer. It has very few rules, but a tremendous amount of complexity during play.

Sudden Death's rules are extremely simple, and while it is nowhere near as deep as Go, it does have some complexity in how one forms their opening hand and tries to control the flow of the game. 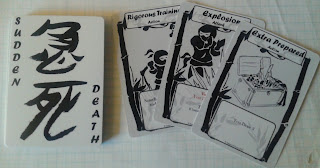 
The card back is my doing. I painted the characters and did the text as well. It took this proof for me to notice the letters aren't properly aligned though. So that's the first thing to revise for the next version. Every time I look at it I find something I want to tweak. :)


The more important side has a lot more going into it. The art is sketches from +Laura Hamilton. All other layout is the work of +Christopher Andersen . He made the frame and sized the images to fit.

There's no substitute for playtesting in game design and the most useful kind is that provided by people who don't have the creators hovering over them or playing against them.

So we're looking for people who want to get a playtest version of the game and ruthlessly tear it apart while documenting the process. There will be a form for that and more info in our next post once we finalize our end. Until then, feel free to ask any questions you have or volunteer yourself to CJ or Erik.