Too much silence, and then suddenly... Print & Play Version 3 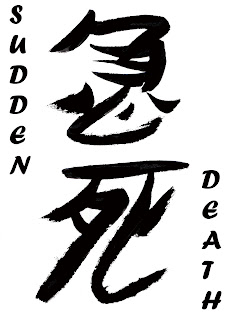 Once again it has been awhile, and I should post more often, but I don't like to post when I have nothing to say so sometimes this will happen. What I can say now is that we have a new version of the Sudden Death PNP and it is ready for another round of playtesting to handle the slight rules changes that come with the new art.

An end to endless circling


Most importantly is a tightening of the language and the removal of extended circling phases. We found from our last round of testing that sometimes the game would just stall because people refused to attack first. That is now no longer a problem because circling is regulated by a set number of "circle actions".  A circle action can be used to either draw 1 card, or play an action card from your hand.  At the start of the game, each player gets a chance to use one circling action each before the battle begins.  During the battle, what we were formally using as Withdraw cards are now simply Reaction cards that negate attacks and give you one circle action before returning players to the battle.  No more returning to a circling phase where things can stall out. That should speed up play considerably for anyone who has encountered that side-effect.

The language should be straight forward, all the keywords are explained in the 2 pages of rules we have posted. The goal for the card text is to have it be very brief but not arcane. The cards benefit greatly from having as much space as possible for +Laura Hamilton 's artwork.

We want to take the game to the masses soon, but first we want to get more people's opinions. I think you will find the art much more interesting now and hopefully it will pull you more into the game as it has done with us.  Please provide us with any kind of feedback you may have for us.

Click HERE to view and download the latest version of our Print & Play demo.
Posted by Inspired at 5:17 PM