Sudden Death, The Mechanics of Play 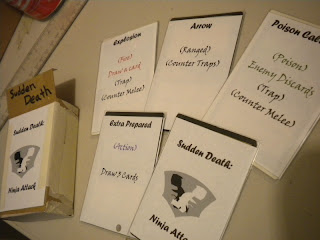 Got to playtest our new prototype of Sudden Death: Ninja Attack at Battleground Games & Hobbies yesterday, and it received overall positive reviews.  I've very confident that all we need is some really good card art and we have a very salable game here.  We are shopping around for artists willing to work for contingent Kickstarter pay (if we don't fund, we don't go forward with art).  We're currently in negotiations with one artist right now, but we'll continue searching if we can't get her.  Speaking of art, we also met an art student there, +Mike Coleman,  looking to get his name out there, so we'll be happy to take a look at his work (so far looks good) and see if he can collaborate with us on some future projects.

Now for the meat of the post; the mechanics of how Sudden Death plays.  As I've mentioned in other posts, Sudden Death: Ninja Attack is a small card game using one deck for 2 players, meant to simulate a deadly meeting between two ninjas in a bamboo forest.  The ninjas will fight using melee attacks, ranged weapons, and deadly traps until only one of them remains standing... or both perish.

There is the initial Standoff, where players are dealt their initial hand of eight (8) cards.  They choose five (5) of these cards to keep for themselves... then pass the other three (3) to their opponent.  Then each player chooses one card to discard, leaving them with a starting hand of 7 cards.  We then move on to the Circling phase.  When circling, players have a chance to prepare themselves further before committing themselves to the fight.  The player with the least number of cards goes first. If both players have the same number of cards then the ancient, ninja art of Janken (aka Rock-Paper-Scissors) is used.  Every time ninjas circle, there is at least one round of drawing/actions before attack cards can be played.  After this time, players can continue to draw or play actions, or they can Strike and start the fight.

Overall games are very short, usually no more than 5 minutes, and take very little time to learn. The deck is small, only 25 cards, but every card is unique, and we've balanced it well so that no one card is a "win all" strategy.  We've had playtest games where one player started out strong, only to have the game turn on them later (it was me... I lost).

Currently we have posted The Rules for anyone to take a look at, and we hope to soon have a Print & Play version out sometime in the near future.  Until we do, Erik and I will be visiting Battleground periodically, so keep an eye out for us and we should have a copy on us to playtest with you.
Posted by Unknown at 5:07 PM