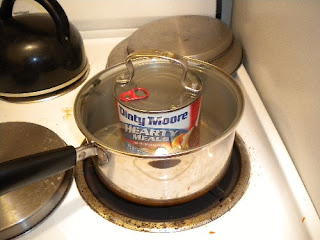 In my opinion, no one does anything exclusively. There are always other demands on your time and no matter how precise you divide that time up other things always intrude. For me those other things are game ideas.

As you may know from following the Inspired Press blog, we have one major iron in the fire (Battle Tank) and several other games (Drachenheim, Chem 101) in development. What you may not know is the many other things that are percolating in my mind while all this is going on. So to shed some light on my process, we've decided to dedicate this week's post to the Back Burner; in particular my current favorites of those back burner ideas. Hopefully this will prompt CJ to talk about his own favorites later in the week.

Top Cat is a fun little idea meant, ideally, for 4-6 players; which is where I try to aim most of my hobby game ideas. In TC you play as a neighborhood cat trying to become lord of the block in a nondescript, suburban town. Each cat lives in one of the houses on a quiet street, except Old Tom who lives in the little strip of woods along the creek. The cats have personalities and their own strengths and weaknesses which guide how they go about taking control of the neighborhood so they can claim the lofty title of Top Cat. The idea is heavily inspired by various animal-hero cartoons from my youth, namely Heathcliff and, of course, Top Cat.

Gobbo Wars: A Game of Junk and Juryrigging

Gobbo Wars was a stroke of genius/madness that occurred when the crew and I were talking about building robots out of junk in the manner of Junkyard Wars. This game is for up to 5 players and each player controls a randomly determined team of goblins and has to assign them to all the various tasks one needs to win in the rough and tumble world of goblin engineering. Some need to scavenge, some need to build and some need to sabotage the opposition because in the end it's the team that carries off the most stuff that wins and what better way to do that than to build a terrifying machine and smash your rivals' work with a wrecking ball?

Flash of the Blade has been lingering in the background for a long time. Along with Battle Tank it was in the original crop of game ideas and it has undergone dozens of revisions along the way. This is a one-on-one card game of Renaissance duelists fighting for honor, glory, love and sometimes simple spite. Each player builds their duelist using several cards to define their personality, fighting style, weapons and the reason they are fighting. Unlike many other card games it is not strictly turn based which is the hardest part of development but one I have been happy to grind away at.

Take to the Clouds to Dogfight in Aces High

Aces High, like Flash of the Blade, is a one-on-one card game and one of the original ideas as well. Instead of swords and pistols though, the weapons in this duel are machine guns and gasoline as each player takes the yoke of one of the iconic fighter planes of World War II. Gameplay is very simple in that there are only four main cards used, but the manner in which they combine and the circumstances of their playing (offensive vs defensive, climb vs dive, etc) make for hundreds of possible results that all ultimately lead to one player crashing and burning. In the current form, the players fly either the rugged Grumman Wildcat or the nimble and deadly Mitsubishi Zero.

Romance of the Three Kingdoms is a board game for 2-6 players set in China during the tumult at the end of the Eastern Han dynasty. It has long been an obsession of mine to put my stamp on this iconic story with its deep cast of characters and intricate plots. It is very "bare bones" due to the massive amount of work it requires to not only make a compelling and interesting wargame but to make sure it captures the pageantry and grandeur of the Three Kingdoms. It needs to include civil building and management, the raising and support of armies, the clash of spears and the famous duels of the novel. The ultimate goal is to allow players to recreate any of the notable scenarios from the stories like the Guan Du war and the famous battles at Red Cliff and the duel at Hu Lao Pass between the Flying General, Lu Bu, and the Three Sworn Brothers: Liu Bei, Guan Yu and Zhang Fei.
Posted by Inspired at 7:20 PM