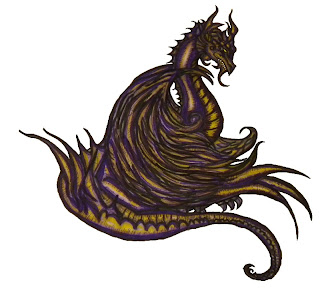 This week we took a break from Battle Tank to let our ideas solidify. In its place we spent our time play-testing Drachenheim.

For a while it was basically the same game, just with more moving parts added as we went along, but now the gameplay has definitely moved into version 2.0. The new turn sequence is my favorite part. Before it was fairly standard and each player got their own complete turn before the others did anything. Now there are three phases to each turn with every player acting in each phase before moving on to the next. The phases are: Resource, Flight, and Action.

The first thing that became apparent with this new turn structure was that going first was a disadvantage much of the time and that dueling became extremely common whereas before it was rare. So to spread the disadvantage around the turn sequence now moves around the table clockwise with each new Resource Phase. In our game it was Jillian, then myself, then CJ at the start, so once we changed to the new structure Jill took the first turn as normal but after the action phase the start passed to me so that I had to move first and Jillian last, then CJ got first move and I last, then back to Jillian first and CJ last, etc.

The round-robin style was a lot of fun but, like I said, dueling was an emergent problem. We tried several methods to resolve that and settled on a simple one. Dragons always get their movement, so if someone moves onto the location you are in you may simply fly away during the Flight Phase if you want to avoid a duel. So far this seems to still allow Spike to benefit from his higher Might since it encourages other players to flee and let him have whatever was at the location. But as CJ found on a few occasions, Spike isn't so much more powerful in a duel that he always wins, so for valuable things Jillian and I were willing to stand and fight.


There were two other big things added as well, stat boosts and full rules for minions.

First stat boosts; I mentioned in a previous post that Dragons have four stats: might, majesty, flight, flame. We have made four dragons and each exemplifies one of the four stats. Spike is brutally strong, Magnus is awe-inspiring, Zephyrus is sleek and swift, and Fiero is an engine of destruction. Dragons are rated at 3 in  three of the stats and 4 in their primary one. In the event deck there are several natural disasters that can be encountered. In addition to being devastating events that can destroy settlements or kill minions, a dragon who conquers the disaster also gains power from it in the form of a stat boost.

Minions add an additional layer to the turn sequence as they give the controlling dragon additional options. Minions move and act much like dragons and thus they get their own token on the table to show where they currently are. Unlike dragons, though, their options are fairly limited. Most minions can only do one thing and have limited carry capacity. For instance Goblins can pillage but they can only carry a single gold token and only villages are vulnerable to them. The Black Knight, on the other hand, will carry no resources, but he is a deadly combatant able to stand up to a dragon and quite skilled at burning down settlements. The Giant is the most powerful of the minions and it can take almost every action a dragon can, it is limited mainly by its slower speed and the fact that it needs to be paid; so while it can carry a great deal, it will only part with a fraction of what it steals.

And that is the current state of Drachenheim, the card game where you play a young dragon seeking glory, power and treasure.
Posted by Inspired at 5:13 PM