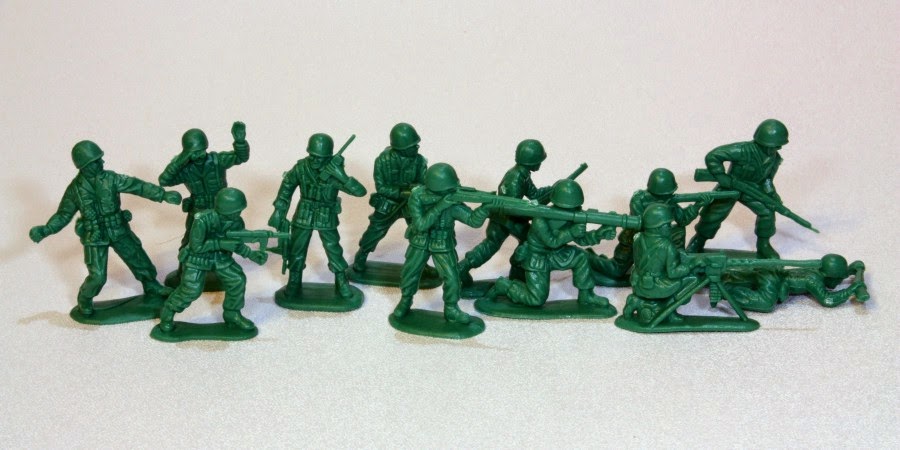 Recently I've been doing a lot of wargaming.

The first kind is Epic: Armageddon. It is an unsupported Games Workshop game based in the Warhammer 40k universe. I play Imperial Guard, Orks, and Dark Eldar and it's a tremendous amount of fun. The scale is 6mm so it is about companies of infantry and dozens of tanks, rather than the handful of units you would use in 40k or Warmahordes.

You can find out much more about it at Tactical Command or our G+ Community.

The second kind is a 25mm skirmish game that is being invented as we play. In this case, "we" refers to myself and my father. My old man is a combat veteran who served as a Field Artillery Surveyor. We're using WW2 and jumping around to include all the various belligerents. Yesterday was our first crack at using tanks and AT guns, specifically T-34s and a PAK 75. Previous scenarios have been located in Europe and focused on the Western Front with only a few games in the eastern theater. We plan to do a Stalingrad scenario soon.

The interesting thing about this, for me, is trying to keep a solid scale that can still allow meaningful activity. Rather than use telescoping distances or artificially low ranges on guns, we've opted to make 1"=10' (2.5cm=3m for our friends outside the US) and use a standard 6'x4' (180x120cm) table. This means that a rifle can reach out the entire length of the board, though it is not very accurate at that range.

A guiding principle is that casualties should not be high on a turn to turn basis when the units involved are standing off and using small arms. To accomplish this we are using a D12 roll-under system with a typical, regular infantryman having stats of 4. So to hit an enemy with his rifle you need to roll a 4 or less on a D12 assuming you have no modifiers, which is pretty rare. Cover, distance, whether the shooter moved, if the shooting is reactive vs active, is the shooter is pinned down, and other things all make it hard to hit. So far in play the most common scenario is that you get a -2 to hit, so you would need to roll a 2 on a D12 for a 1-in-6 chance of having any effect whatsoever.

Then when you do hit, you roll to see what effect you had: KIA, Wounded, Disrupted, or Nothing. KIA generally requires a critical hit and Nothing needs a Fumble. A unit that is Wounded gets a saving throw to determine how badly they are hurt. Disrupted is automatic and is a measure of suppression and loss of command and control.

To sum up our goals:

The main difficulties encountered so far are mainly bookkeeping issues. Tracking who is wounded for instance as well as morale states take up a lot of time. Another related thing is damage to vehicles and structures. Tank armor varies a great deal, especially when you can turn your heavily armored turret to any direction.

So far there are tables upon tables to refer to. Streamlining those is going to be a major theme of the next few playtests.

The game has evolved and grown a lot in the past couple weeks. We began with only a few assumptions that I mention above and add 2-3 new rules or special effects each game. A new thing can be as simple as a weapon we haven't used yet or a new nationality or type of soldier. It can be complicated such as how to handle smoke. Smoke interacts with the visibility, area fire and windage rules, and it moves and disperses as well.

Once the rules are more settled, we will be doing some hacks for using popular 25mm games in our rules because I have a large number of models for them that don't get much use. A small unit of heavily armored superhumans vs a vast tide of aliens has to happen at least once. :)

We're also planning to do a demo this summer. We've already picked out a scenario: French Resistance vs German officers in the Paris Opera. With that we'll be able to showcase more than a dozen special rules including unarmed combat, bystanders, snipers, and heroes, as well as having several different troop types present.
Posted by Inspired at 12:14 AM

Email ThisBlogThis!Share to TwitterShare to FacebookShare to Pinterest
Labels: Wargaming