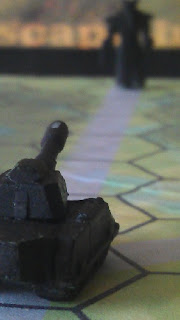 -Erik McGrath
Yesterday we decided to cancel funding for the Battle Tank Kickstarter. We didn't want to do it but it was apparent we weren't going to make our goal in the time we had left and that we were better off stopping now and regrouping.

We have learned some valuable things about what to do (and not to do) in the future though, so all in all I consider this a win. In the next few weeks we will be physically improving our prototype, making new videos, expanding the storyline and spending much, much more time getting the name out there.

All of yesterday was spent strategizing. We need to make our operation as small as possible and do as much in-house as we are able. That means sourcing materials and putting our own skills to use assembling the game rather than sending it out for production. In the future, or as a stretch goal, we want to be able to produce a larger number of sets but that would require a larger goal and we would much rather succeed small and have to work overtime rather than fail again.

For right now my focus is on building molds and casting tanks and robots to replace the cardboard chit stand-ins we have been using. CJ will be putting the finishing touches on the artwork for the tiles.

So please continue to give us feedback.  This campaign has been extremely educational, and will allow us to focus our zeal for making games into better marketing.  You can give us feedback here by leaving comments, or by emailing us at inspiredpressgames@gmail.com.
Posted by Inspired at 6:22 PM