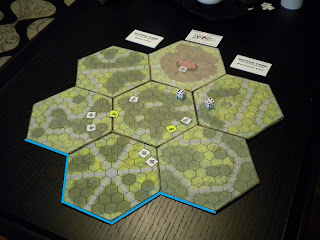 Since updating the art and converting squares to hexes we now have our new Battle Tank prototype!  The rules are almost completely identical with hexes, so mostly the only update there involved a find/replace.  Our gaming group got to playtest with the new hex tiles and we found gameplay to be significantly enhanced. Hexes gave us much better movement options and more diverse configurations for the island to take.

One significant rule change, however, involved the tank players' win condition.  In the square prototype, our tanks would "win" if they could exit the board via a road on the square tile farthest from the volcano.  With the new hex configuration, we found we had to revise that.  So now the "beach" which the tank players are trying to get to is defined now by the board edge opposite the volcano edge, indicated above by the blue line I drew.  If 50% or more of the tank players exit the board via road hexes along that blue line before 10 turns is up, the tank players win.  Otherwise, if the Mad Scientist player can delay them 10 turns, or he blows them all up with his mechanical minions, he wins.

This photograph still uses our square tank and robot tokens, but that will be updated to be plastic hex tokens for the finished product. You can see a pair of tanks (in yellow) surrounded by deadly robot soldiers. 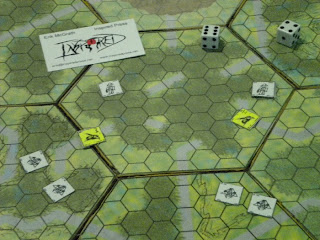 It turns out there is a lot to consider when trying to accurately figure out all your costs for a Kickstarter, so that you can set your goals without going way over or under your actual ability to come through.  Add to that the new verbiage about Kickstarter stressing their ideals of "this is for making projects happen, not placing orders for products", we need to be very specific to outline the expectations for backers of our Kickstarter.  While we certainly do plan on giving out copies of the game as a reward tier for supporting us, we need to be clear that the purpose of the Kickstarter is to help Inspired Press expand by funding a printing run of Battle Tank, and expanding our team's abilities to design, prototype, market and sell our games to the people that love them.

As the accounting brains of the operation, I found the breakdown and comparison of costs between our printing options fascinating.  The original plan was to print 500 units of Battle Tank: Escape from Giant Robot Island using a very local printer.  The upside to this was that he was close by, and could support very small runs.  The downside is that we would need to fabricate our own tokens using a 3D printer we would get with Kickstarter funds.  But as it turns out, if my estimates are accurate, we can take the same amount of money and print a good deal more units from a manufacturer who can also produce the plastic tokens (we would still be getting the 3D printer though, as that will help with prototyping future expansions and other games).  That puts us a little close to the line to do that, so we'd pretty much only break even if we only reached our goal and didn't go farther.  But in the end, breaking even is a win for us since it meets the original goal of getting us a 3D printer for prototyping, and produces a printing run of our first game.

We would welcome comments from anyone with Kickstarter experience.  Stay tuned!
Posted by Unknown at 5:13 PM